This stuffed pasta is typical of Parre, a village in the province of Bergamo on the slopes of the Trevasco and Alino mountains. Their odd name given to these raviolis seems to derive from the cloth shoes that went by the name of scarpinocc, used until a few decades ago by the shepherds of Parre. It is argued that the name may point to their shape which is reminiscent of that hand-made footwear. In the shepherds’ jargon, scarpinocc are also called betoi which literally means donkey ears, but in this case they are a larger size. 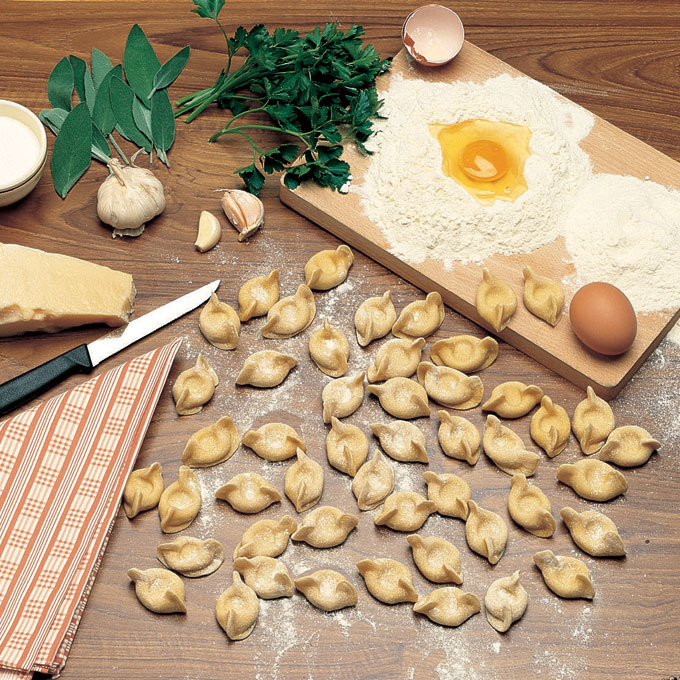 Emblem of Parre’s popular culture, scarpinocc always accompany the festive occasions of that village, highlighting the local cuisine and at the same time, the simplicity and deliciousness of mountain dishes.

As they originated in a rural context, scarpinocc look like casoncelli, but in reality they differ for the filling that is not made of either meat or cold cuts. It consists of cheese and breadcrumbs, and takes a yellow hue because of the greenish pigments of parsley and other herbs.

The name of scarpinocc di Parre is bestowed only to the product that meet the specifications set by the "Bergamo, City of the Thousand... flavours” trademark.

The final shape of these ravioli is 6 to 8 cm wide.