A typical product of the local cuisine, Bergamo salami has very ancient origins. In the aftermath of World War II, sources remind us that it was also used as a formal means of payment.

In the agricultural world it was a rarity; in fact, it was produced only once a year when farmers slaughtered the pigs fattened for months on end. Then, salamis were stored attached to the ceiling, in the cool

environment of cellars, where the gut casing that protected the interior was enriched with those moulds that have always made this product uniquely exquisite.

Salami is indeed related to the particular climate of Bergamo, which it is characterized by high humidity, and this fact favours the maturation of the meat. 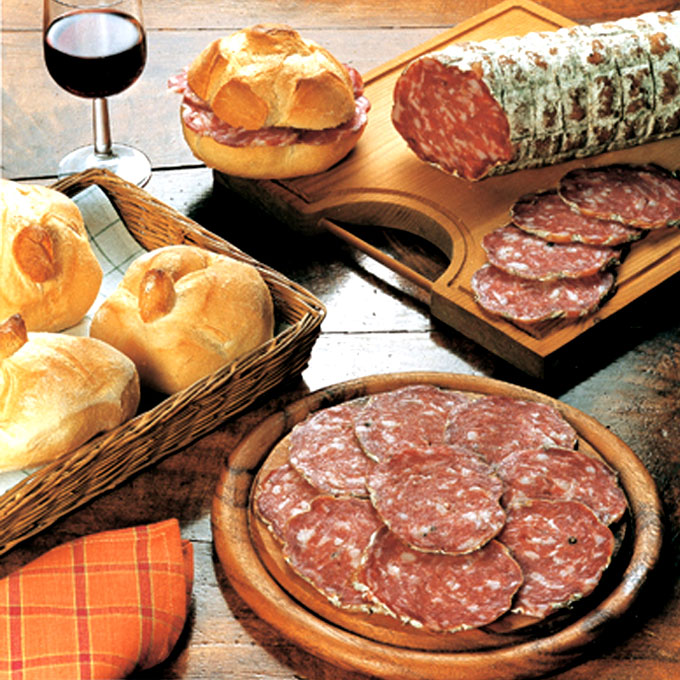 It is made from fresh pork. Its main feature is the usage of various pig parts: the lean part is taken from the leg, the shoulder and the neck; the fat part from the chin. The meat must be ground.

Black pepper, red wine, spices and crushed fresh garlic are marinated in wine, and then added to the mixture in order to give it a very special taste and aroma. The mixture is then stuffed into natural pork casings and finally tied by hand.

Maturing takes place in a cool and ventilated environment. It is in this period that the characteristic white, grey or sometimes green mould appears on the gut.

The final product has a cylindrical shape, with a diameter greater than 7 cm, and weighs about one kilogram. The texture is firm, and the fat well mixed with the meat. The texture becomes more compact as maturation increases. Its flavour is delicate and its taste is sweet-salty. Its aroma is lightly scented of garlic.