It is a traditional Bergamo cured meat that was invented in order to use the least valuable parts of slaughtered pigs. 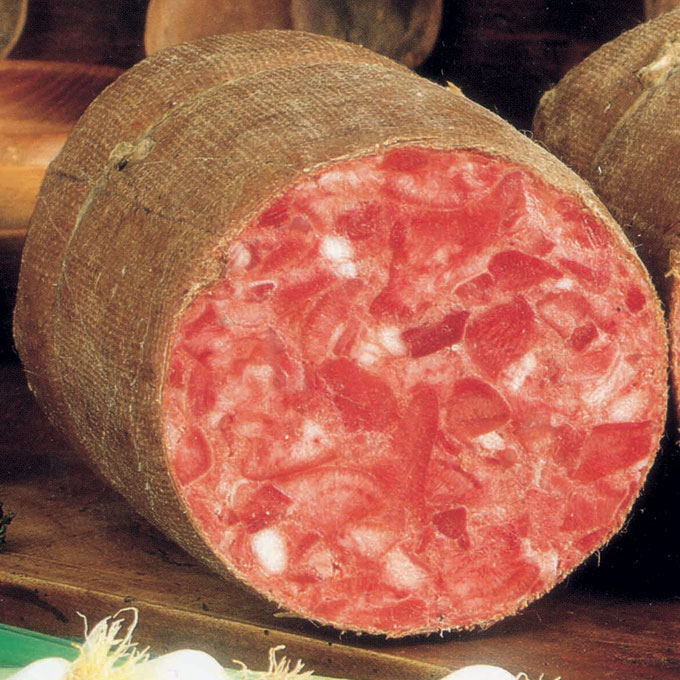 The meat (traditionally a pig's head without the brain and occasionally with the tongue, or a half cow’s head with the addition of some pork rind) is boiled in water in special tanks at a controlled temperature for at least two hours.

Once cooked, the bony parts are removed and the meat is ground, a process which can also be coarsely carried out with a knife. The chopped mixture still hot is then added with the seasoning, prepared according to the recipe of individual producers. It is mixed and put into natural bovine gut or synthetic casings for food use.

Finally, testina is bound, pricked, squeezed and washed with cold water, and finally placed in special rooms at a temperature of 2-4° C. It does not require drying or curing and it can be eaten after only 48 hours.

The product has a cylindrical shape, slightly curved if preserved in bovine gut, or otherwise in an elongated or straight shape if stuffed into other casings. It weighs between 4 and 14 kg and has a colour that can vary from light red to dark grey. The scent of spices and flavourings can be detected by smell. The resulting flavour is very aromatic.