Known as one of the typical dishes of Lombardy, casoncelli can actually be found over a vast area in North Italy. However, this dish of stuffed pasta has almost certainly a common origin, that is the use of leftover meat or bread, minced and mixed to make the filling. Casoncelli, disputed between Bergamo and Brescia, are defined by various cookery book authors with different dialectal terms that can be traced back respectively to villages of those two provinces. Charles Steiner, in "The Lombard glutton" of 1964, talks of a bizarre Bergamo casoncelli bonbon.
The countless versions for these ravioli, whether found in manuals or passed down in families from generation to generation, are described in modern cookbooks in a completely different way from the dish as it was produced until the nineteenth century. In the past, a greater amount of spices and a generous quantity of cheese was used in the filling. Today, however, the filling is almost always meat. 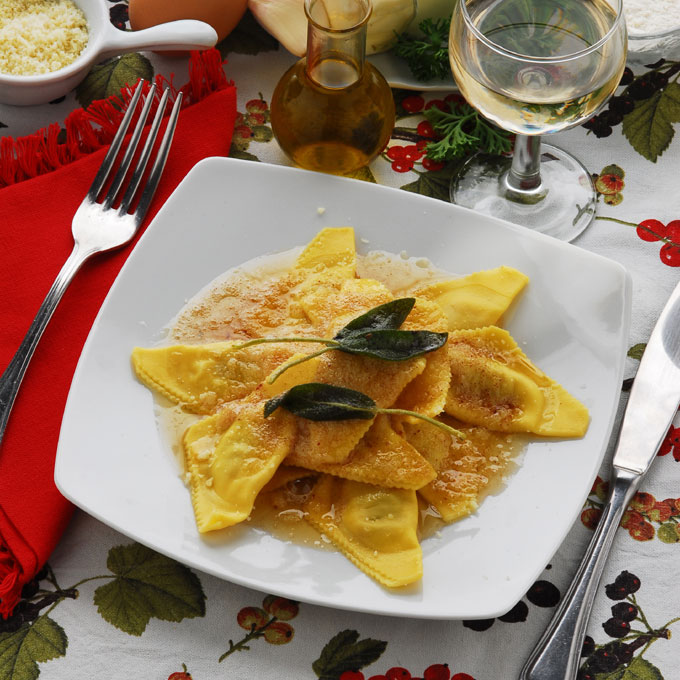 Apart from their tasty and authentic savour, casoncelli are characterised by a peculiar filling which varies from area to area, ranging from cheese combined with breadcrumbs, garlic, parsley and eggs, to one predominantly made of meat (salami and sausage meat, chicken, roast veal, beef and others), sometimes flavoured with amaretto, raisins, lemon zest, pears and other candied fruit, mixed with eggs and butter. The combination of all these ingredients actually corresponds to the recipe of the Bergamo casoncelli now codified by the Chamber of commerce. Thus casoncellis represent the whole province, from the mountains to the plains, from the valleys to the city.

Their crescent-like shape has a diameter that varies from 6 to 8 cm. Casoncellis are best served with butter, a sprinkling of parmesan cheese, bacon and sage. Recommended wine: Bergamo Merlot. In the panorama of the different types of casoncelli, there exists a sweet variety, derived from the medieval casoncelli filled with fruit or jam, fried in oil and served with a dusting of icing sugar